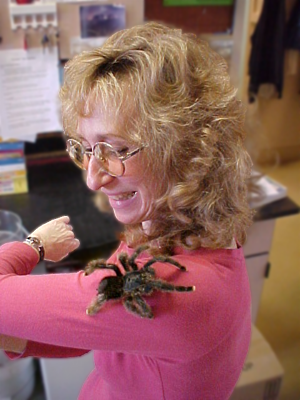 Sy Montgomery (born February 7, 1958), is a naturalist, author and scriptwriter who writes for children as well as adults. She is author of 28 books, including ''The Soul of an Octopus: A Surprising Exploration into the Wonder of Consciousness'', which was a finalist for the 2015 National Book Award for Nonfiction and was on The New York Times Best Seller list. Her most popular book is ''The Good Good Pig'', the bestselling memoir of life with her pig, Christopher Hogwood. Her other notable titles include ''Journey of the Pink Dolphins'', ''Spell of the Tiger'', and ''Search for the Golden Moon Bear''. She has been described as "part Indiana Jones, part Emily Dickinson". Her book for children, ''Quest for the Tree Kangaroo: An Expedition to the Cloud Forest of New Guinea'' was the recipient of the 2007 Orbis Pictus Award and was selected as an Honor book for the Sibert Medal.

For a half-hour National Geographic segment, she scripted and appeared in ''Spell of the Tiger'', based on her book of the same title. Also for National Geographic, she developed and scripted ''Mother Bear Man'' based on the work of Ben Kilham, who raises and releases orphaned American black bears, which won a Chris Award.

Author Vicki Croke asked Sy what she has learned, not just about an animal’s natural history, but lessons about life. Sy answered: “How to be a good creature. How do you be compassionate?… I think that animals teach compassion better than anything else and compassion doesn’t necessarily just mean a little mouse with a sore foot and you try to fix it. It means getting yourself inside the mind and heart of someone else. Seeing someone’s soul, looking for their truth. Animals teach you all of that and that’s how you get compassion and heart.” Provided by Wikipedia
Showing 1 - 1 of 1 for search: 'Montgomery, Sy', query time: 0.02s
List  Tabulka
Search Tools: Get RSS Feed — Email this Search —
Loading...